“The inspiration for this collection is our vineyard.” Tsarev Brod winery team.

We started planting our vineyard in 2001 next to the village of Tsarev Brod, very close to the only rock lay in Europe – the Madara raider, one of the national symbols of Bulgaria and an object of cultural and natural heritage of UNESCO.

In 2007 we planted the Riesling variety in it. The first harvest in 2011 of the variety was vinified by our partners. Then, during the 2012 and 2013 harvests we continued to work together and pick the optimally ripe high quality Riesling grapes for them. When in 2014 the idea of a winery next to the vineyard was growing we realized that these 13 years of waiting are worth it, because the winery and the building can be quickly constructed, but the vines need time. In the summer of 2014 we opened a bottle of Riesling vintage 2011 and again realized that the wine from our four-year-old vineyard, which had been aged in a bottle for two years, showed great potential. We said "wow", what will it be when the vineyard turns 20….so we were determined that whatever it cost us, we will work hard and patiently for the Riesling variety in Tsarev Brod. The meaning is - Riesling is a white variety that under appropriate conditions can age over 30 years, but for this purpose the yield of the vineyard must be controlled and the wine must be made with this intention.

We decided on the harvest of 2014 to vinify it in Santa Sarah estate and this to be the first wine of the new Tsarev Brod winery Riesling 2014. It was launched in 2016, after a year of aging in a bottle - the very first wine under our own label. A special wine for us, because it is the first bottled wine in our new cellar and it is no coincidence that it is the only one with a different bottle in the box. Not yet with a concept for our bottles, but determined to provide the wine with better conditions for aging than in a newly furnished cellar, which was still a construction site. We put the wine in a bottle that could be delivered to us within days in July 2015.

After that the next harvests we were already at home, we built the winery surrounded by our 400 decares of vineyards, we picked the grapes at the end of September and we tried to process the freshly picked fruit immediately. The optimal conditions for autumn in 2015 helped us for Tsarev Brod Riesling 2015 - the second wine in our Riesling collection. Again after two years of aging in a bottle, according to the DiVino magazine ranking, it was voted among the top 20 of all Bulgarian wines released on the market that year. The next harvest we made the same way - Tsarev Brod Riesling 2016, the third wine in our box.

So we came to the 2017 harvest, in which we had a very long and dry autumn. After we partly harvested the Riesling at the end of September, we made Tsarev Brod Riesling 2017 - the fourth wine in our box. We had an idea to delay the other part of the remaining Riesling for another month in the vineyard which we picked at the end of October. So we made a natural concentration in the vineyard, the grapes and wine became quite amber for our new series with a yellow label Tsarev Brod Riesling Amber Harvest 2017 - our fifth wine in the box. Impressed by the result of the 2017 vintage, we repeated Tsarev Brod Riesling Amber Harvest 2018 - our sixth wine at the box office. The wines under our yellow label always age for a year on their own lees without any preservatives while they continue their natural development and maturation before bottling.

"This is not just a case (box) for us, it is the basis of our history. We are working so that this foundation can withstand hundreds of years work on it!" 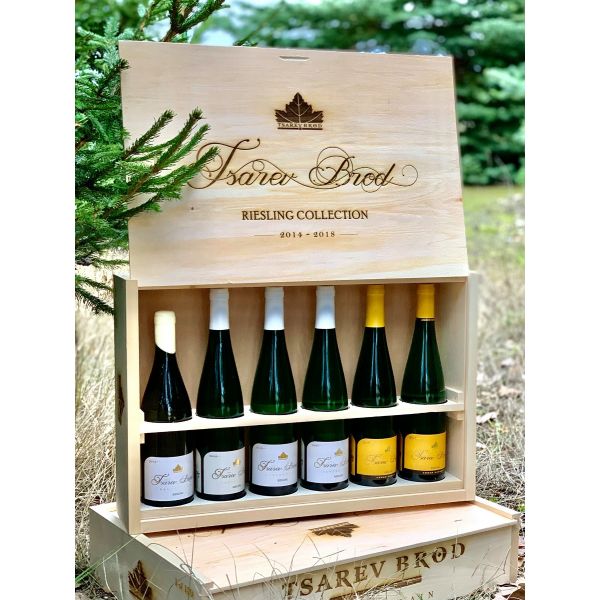